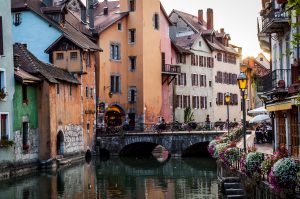 The Vieille ville’s nickname is “the Little Venice of the Alps” because 3 little rivers are crossing it. The best way to visit Annecy Old Town is to walk in the pedestrian district. You can stroll along the Thiou canal and on Sainte-Claire street. Visit the Castle (see my post on it), the Island Palace, Saint-Peter’s cathedral, Saint-François church, Saint-Maurice church, Notre-Dame-de-Liesse church.

The River Thiou is one of the shortest rivers in Europe. It is just 3.5km long most of which is in the canals running through Annecy making it such a beautiful city.

The Island Palace also called the “old prison”, was built in the 12th century. The Palais de l’Ile was a court house and a prison and inside you can see the former prison cells and visit an exhibitition on the architecure and heritage. It is the symbol of the town and is among the most photographed monuments in all of France.

Rue Sainte Claire is full of restaurants and cafés, you will find a beautiful Renaissance door, a clock and a fountain (1635 with a trout sculpture). There is the market on Tuesday, Friday and Sunday mornings. A Brocante the last Saturday of every month.

St François ‘s Church from the 17th century, with a white baroque façade (statues were stolen).

It was before a woman congregation to help the poor and sick people. It is now used by the Italian community for Sunday mass and called the “Italian Church”.

St. Peter’s Cathedral (1535), with a high Renaissance and Gothique façade, the inside is quite dark but has a few paintings.

Rue Filaterie, the most beautiful street with lots of archways. From there go to Notre Dame’s square to find a strange fountain (with an obelisk hold by tortoises). Notre Dame’s Church (15th century) has an old square leaning tower and a neoclassic Sardinian façade.

Rue du Pâquier, with a few arches, the “Puits St Jean” from the 15th century, 12 rue du Pâquier the “Hotel de Sales” with its elegant pink façade with busts showing the different seasons.

Rue Jean-Jacques Rousseau (famous French philosoph) who used to take musical lesson at number 13 and met his lover by the golden balustrade.

Annecy Old Town can be very busy in the summer, try to discover it early morning (on a non market day) to enjoy the calm of it and take lovely photos souvenirs.