Supermarkets in or near Annecy:

Below you will find the full list of supermarkets or hypermarkets in the area http://supermarches.grandes-enseignes.com/74-haute-savoie/74010-annecy.php

Auchan in Grand Epagny 74330 Epagny is probably the biggest in the area, it is also surrounded by a lot of other shops and restaurants. Big free parking but can be crowded during week ends.
Géant Casino avenue Aix les Bains in 74600 Seynod

You have some shops around it too, usually less people than in Auchan.

Those big hypermarkets also have a petrol station next to them, cheaper than Esso or Total for example.

You also have some supermarkets like Monoprix (in Courier or in the Old Town) open from 8h until 20h from Monday to Saturday. They offer good quality products. You can also find some international products. Convenient as really central.

Those open on Sundays:

You can also find some hard discounters like Lidl or Aldi in Seynod.

You also have “Grand Frais” ( 18 rue Zanaroli 74600 Seynod or rue de la Mandallaz in Epagny) which is like a big market with a lots of fresh and exotic products.

Also do not forget the outside markets in town (see previous post on it) https://www.taxi-massingy.com/en/annecy-markets/ 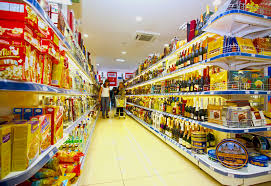