This walk in the Old Town of Annecy is going up hill and includes a few stairs and should last approximately 1h30. 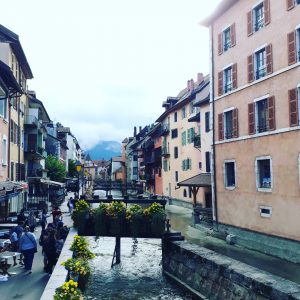 From Quai Perrière, in front of you, you can see the valves closing the entrance of canal St Dominique which is disapearing under St François’s Church.

From where you are, you will find some narrow stairs going into the Thiou river. Next to it, in the water, a big stone on the left which is linked to a metal ring on the wall. It was the start of a bow over the Thiou, that way they could close the passing on the river with some chains.

Walk through Garibaldi passage, then turn right in faubourg des Annonciades. Here is Porte Perrière, the Annecy entrance when coming from Italy. On the top of the door, see the trout, the  symbol of Annecy.

Walk up Côte Perrière to the Castle. Have a break and look at the rampart overlooking the dead end street Trippoz. At the top of the hill, turn right on chemin de la Tour de la Reine and reach the Castle square.

The Tour de la Reine from the 13th century have only a few openings, its thickness can reach 4,5 meters.

There used to be a cemetery and a church (St Maurice) on the square, on one wall you can see a wrought iron cross to prove it.

Down the square, the old house with old wooden stairs used to be the vicarage.

Going down chemin des Remparts, you will find a lovely quiet public garden on your right.

Go backward to chemin des Remparts, then turn right on the start of Côte St Maurice, straight to rue Basse du Château. See the top of the houses and the wall on the right holding the terrasse of the old St Maurice church (now transfered in front of the city Hall).

At the end of rue Basse du Château, go down the stairs in a narrow hall going into Rue Ste Claire. Cross it, going under the houses over the Thiou on Pont Morens (the oldest wall bridge). The street is again going under a house into Jean-Jacques Rousseau street.

Look up on the right to see St Pierre statue and on the left an emblem with a golden bullock.

Turn left and immediately right along the cathedral.

Next to the cathedral, a little square with an old well on the right, then on the left the canal Notre Dame meeting canal du Vassé.

Go back to the houses along the cathedral and do not miss the covered passage going through them to reach the arches of rue Filaterie. In front of you, slightly on the left, another mysterious passage reaching the rue du Collège where you can see canal St Dominique with typical wooden houses.

I hope you will enjoy this walk in the Old town, you can get a free map of Annecy in Office du Tourisme in Bonlieu (in front of pâquier garden) or in many hotels in town.
http://www.annecy-ville.fr/vieille-ville-annecy/