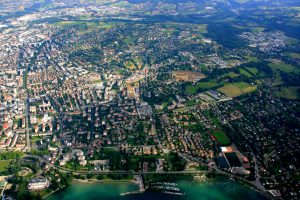 A lot of foreigners can be confused but Annecy le Vieux is not the same as Vieil Annecy (Old Town)!

Annecy le Vieux and the Old Town of Annecy are 10 km away so be sure not to confuse them when booking your accomdation!

It will be more quiet in Annecy le vieux but might be more difficult if you do not have a car.

Annecy le vieux is now the fourth biggest city in Haute Savoie, famous for being a posh residential area.

From -50, Romans set up a city in the North of Annecy (which they called Boutae), it was a strategic position (Italy/Geneva/Vienna).

Then, a rich Roman called Annicius built a large house (in Annecy le Vieux historical center now) called Anniciaca, it was on top of the hill with a view on Boutae and the lake. At this time, big houses were big farms where hundreds people were living.

After a few attacks and defeat of the Romans, people left Boutae to reach Anniciaca.

Anniciaca grew bigger and bigger and the city fortified herself and was living from agriculture and became a rural capital.

But from 1107, the new walled city Annecy le Neuf (by the river Thiou) is becoming more important.

Annecy le Vieux was continuing with the vineyard, cattle breeding, cereals…and was also chosen by rich landlords for second houses.

During the XIII, Annecy le Neuf became the largest city of the County.

Nowadays, Annecy has two faces, the old Town and the new City.

Annecy le Neuf is now the Old Town (Vieille ville) for us and Annecy le Vieux  a residential city.

Yes I know a bit confusing but Annecy le Vieux is not the same as Vieil Annecy!

Of course, you are more than welcome to visit Annecy le Vieux, follow the sign “Chef lieu” and park next to the city hall and the Church.