Gâteau de Savoie is a local cake quite easy to make, a bit like a sponge cake I guess…

It was created by the Pastry Chef of Amédée VI (1334 – 1383), Comte de Savoie, Aosta and Maurienne who invited the Emperor Charles IV for diner. The cake had the shape of Savoie, the mountains and hills with an imperial crown on top of it.

This cake is still currently made and also called “biscuit de Savoie”.

A special mould should be used.

It is a light and moist cake which you can enjoy during the winter with a cup of tea or during the summer with a fruit salad.

* butter for the mould

Break the eggs, separate the whites and the yellows.

Add the sugar to the yellows and mix until it gets white and foamy.

Add the flour, maizena and the zest of the lemon.

Beat the egg whites until stiff then add them delicately.

Take it out of the mould, wait for it to cool down and add the icing sugar

If you are greedy, you can cut the Gâteau de Savoie in half and put some jam in the middle or some english custard with fruits.

Or eat it with chocolate mousse…

You could also try this recipe by a Grand Chef https://www.academiedugout.fr/recettes/gateau-biscuit-de-savoie_9219_2  or https://www.mercotte.fr/2007/05/29/saveur-de-mon-terroir-tout-simplement-le-gateau-de-savoie/ 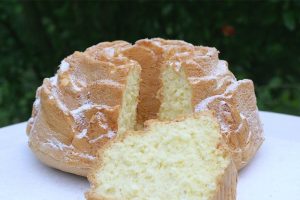