Cascade du Pissieu is a  beautiful waterfall  near Lescheraines and Le Châtelard in les Bauges in Savoie.

It is approximately one hour drive from Annecy.

You have to walk 30 min to reach it but it is a flat easy hike.

You have road signs to show you the way.

Next to the parking, there is a farm where you can buy local goat cheese.

While in the area, you can also visit Lescheraines village or have a pique nique at the ponds.

The water of Cascade du Pissieu is very cold even during the summer but the brave ones, can jump in for a swim.

If you are going with kids, bring water shoes, as the water level in the summer is low and it is nice to play around and cross over the other side. Stones do not make it comfortable without shoes, believe me, I already tried and it was funny to watch me walk on the stones!

Pissieu waterfall forms just downstream from a source into which most of the rainwater and snow-melt drains into off the Margériaz Plateau. It is created from a karst resurgence of water from the so-called “Vauclusian source”;
Beneath the entrance to the source, a submerged underground network plummets to a depth of 50 metres before making its way back up towards the Margériaz Plateau.
Up to now, 79km of underground networks have been identified under the Margériaz Plateau, including the ‘Tanne du Cochon’ network, which has an elevation difference of 825 metres between its starting point on the plateau and its resurgence at Le Pissieu.You can get to the waterfall either via the car park by the ‘Pont sur le Nant d’Aillon’ (bridge over the Nant d’Aillon river) on the road between the villages of Attilly and Le Villaret Rouge, via the swimming lake in Le Châtelard or via Les Iles du Chéran Outdoor Activities Centre car park.

You can also stop at the following places on your way, https://www.taxi-massingy.com/en/prerouge-grotto/, Ice cream and chocolate place in Lescheraines https://www.chocolateriejacob.com/glaces, Fruitière de Lescheraines to buy some local cheese…. 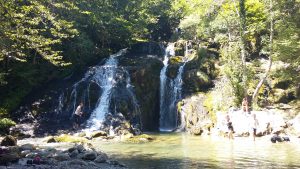