From Annecy Castle https://www.taxi-massingy.com/en/annecy-castle-museum/ , you can down different ways and enjoy the view on the Old Town Roofs and gardens!

You can realize how the Castle was protecting the city and the view from there is beautiful!

There are many steep narrow streets which lead to Annecy Castle. Most of them show the old town and its roofs from a good angle. We recommend walking up the following streets in Annecy Old Town: Côte Perrière and Chemin de la Tour, Rampe du Château, Côte Saint Maurice or Chemin des Remparts

A lot of the flats you can see are now B & B, there are central and nice but can be noisy, without AC and no parking facilities.

Here are a few photos, taken with my mobile, not the best but just to give you an idea!! 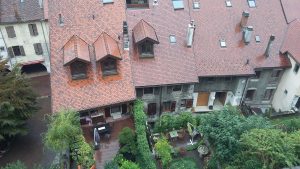 A former 12th century fortified castle, the castle of Annecy has been reworked many times, particularly by the Dukes of Savoy in the 15th and 16th centuries. Former residence of the Counts of Geneva and Dukes of Savoy-Nemours, it is the property of the town since the early 1950s.

Classified as an historic monument, it has been completely restored to house today a museum with rich collections.

It is in the form of a large polygonal enclosure with a beautiful walkway. It consists of the Queen’s Tower, thirty-eight meters high, the Vieux Logis including its Hall of Columns stone, the tower of St. Peter in the mid-eighteenth century, the tower of Saint Paul de the end of the fourteenth century, the Nemours home with a watchtower, the home Nine of the second half of the seventeenth century, and the tower and home Perrière. A terrace also allows to obtain an impregnable view on the old town.