In the XIX century, le ramoneur Savoyard was traveling all over France to work and escape the poverty here. Chimney sweeping was not well paid, but the families had many children and they had to accept it. They were usually departing on Saint Gras day (September 7th) and coming back home the next year at spring.Kids were starting from 6 years old and were following their Master on the French roads.Because they were young and small they could go and clean inside the chimney.

You might have seen this little doll in souvenir shops.

They were bringing with them a marmot doll to remind them of home, they were also using it to get some tips.

They were working every day 14 hours.

If they wanted to go to church on Sunday, they had to buy the right to the Master.

Masters were too big now to fit in the chimney so were now in charge of a team of 3 to 6 kids.

The Masters was getting all the money and sometimes even beating the kids to get their tips.

However, he was supposed to buy them new clothes and shoes.

At the return home, the Master will give some money to the parents (usually the price of a veal).

They were sometimes walking bare feet to save their clogs, begging for bread, sleeping in some farms using their soot bag as a cover.

They had their own secret language, a mix of patois from the different villages they were coming from.

Unfortunately, some petits ramoneurs died of the cold, fell, had respiratory disorders, became blind because of the soot….

But the petit ramoneur savoyard was the happy and cheeky emblem of Savoy.

And the doll is now use as a lucky charm (as they were before protecting the houses from fire), you can buy it in most of the souvenirs shops in Annecy. 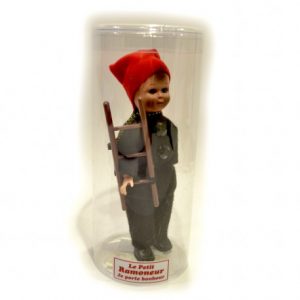