Near Duingt, Roselet Village, a pretty place was swallowed up by the water. The legend says that its inhabitants refused hospitality one winter’s evening to an old beggar-woman, who was in fact a fairy. Since then, on moonlight nights, if you are out in a boat and lean out over the water, you will hear the sound of cocks crowing and bells ringing, coming up from the depths.

A strategic site that was inhabited about 1000 BC.

It is 400m from the Lakeshore and its discovery was firt mentioned in 1856.

The dating of the wooden stakes shows that the site was occupied several times during the Late Bronze Age, between 1058 BC and 880 BC.

It is now between 1 and 2 meters below the water.

If you wish to locate it, there is a beacon and a few buoys showing its position.

There is another fairy legend saying that some fairies were trying to build a bridge to join up the two banks.

Now Roselet village is a good place for divers and there is an hotel restaurant in front of it.

You would need a boat to get there, you can contact them, they are very good http://www.water-taxi.fr/ 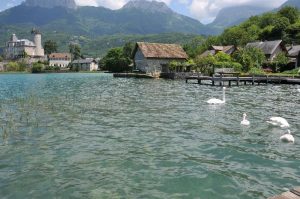