The traditional Opinel knife has a beechwood handle and a high carbon steel blade. Opinel is a company that has manufactured and marketed a line of self-named knives since 1890 from its headquarters in St Jean de Maurienne (Savoie), where the family run company also operates a museum dedicated to its knives.

Originally sold a a working man’s knife, the Opinel knife has become emblematic of French (specially Savoie) culture. And you can find it in most houses in the area, in the kitchen, workshops etc

Pablo Picasso was using one of them as sculpting tool.

Joseph Opinel began making knives in 1890 as a simple working man’s or peasant’s knife. It proved popular and in 1897, a series of twelve sizes (numbered from 1 to 12) was developed then he built his first factory in 1901 and produced a machine for mass production.

The Opinel Virobloc or safety twistlock mechanism was invented by Marcel Opinel in 1955.

The “Crowned hand” device was already present on the blade of very early models. Later the words Opinel, France and Inox (non oxidizable) were added.

In 1989, the word Opinel entered the French dictionary.

Opinel is part of every day’s life here, personaly I love it (nice and safe!) now you can find some with funny designs (Tour de france, Girly ones, for kids…) 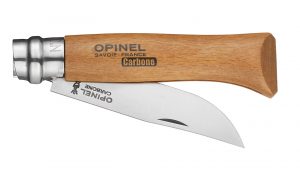