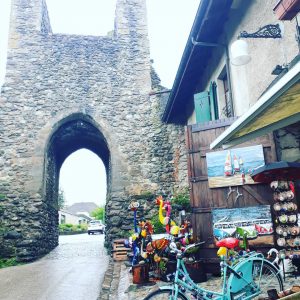 Yvoire, a  lovely medieval bourg, ideally situated on the expanse separating the “little lake” from the “great lake” of Lake Leman, still possesses some of the essential elemants of the fortifications of the 14th Century : the castle, doors, ramparts…
Yvoire is next to Evian (the famous water from the Alps) and approximately 1h30 by car from Annecy.

Known as a modest fishing village in the beginning of the century, Yvoire is now ranked as one of the International Laureates of Floral Decorations, and is a member of the Association of the Most Beautiful Villages of France. This medieval city celebrated its 700 years in 2006.

Since ancient times, the upper valley of the Rhône and Lake Leman have formed a route through the Alps between Italy and France ; the lake itself, with its varying winds, facilitates the transport of goods which are carried on lateen-rigged boats. Yvoire’s strategic position, on a point between the “small lake” and the “large lake” did not escape the notice of Count Amédée V the Great, who under took important fortifications from 1306, during the war between the Dauphiné and Savoy. For half a century, the village of Yvoire had a very important military rôle, which earned certain freedoms for its inhabitants in 1324. Later, when the whole region was occupied by the Bernese, allies of the French and Genevese from 1536 to 1591, the village lost its ramparts and military rôle ; the castle was burnt and remained roofless for 350 years. For a long period, Yvoire sank back into anonymity and the proud strongpoint became a village of farmers and fishermen. Important evidence of the past has been miraculously preserved : the castle, ramparts and fortified gateways, ditches and houses. These must be restored and brought to life, yet protected against the ravages of modernity so as to preserve the atmosphere.

Few things to visit there:

*The Garden of the Fives Senses (see photos futher below)

In the heart of the village, the castle’s former kitchen garden restored in medieval style has been transformed into a spot of rest and dream : a plants labyrinth changing with hours and seasons, a timeless walk of discovery for all ages, a universe of colours, scents, sounds and textures… Classified « Remarkable Garden » by the French Ministry of Culture.

Spread over 24 hectares, with a lakeside of 1.2 km, the Rovorée-La Châtaignière site is made up of two public properties belonging to the Haute Savoie Departmental Council and the Coast and Lakeside Preservation Authority. It is a Protected Nature Area, and area for family walks and relaxation, with signposted paths. It has a remarkable group of chestnut trees which are several hundred years old, and is accessible on foot along the green path leaving from Yvoire, or by the sun-shuttle which runs during the summer season.

No cars allowed in the center, so enjoy the calm of the pedestrian street! However, not really recommanded for wheeling chairs or persons with walking difficulties as the path is made with cobble stones….

You will find there lovely little boutiques (art, craft, food…)

If you do not have a car to get there, please do not hesitate to contact me https://www.taxi-massingy.com/en/taxi-annecy-geneve/

Below photos of the Jardin des 5 sens

Below photos of Evian