Hautecombe Abbey (Latin: Altæcumbæum) is a former Cistercian monastery, later a Benedictine monastery, in Saint-Pierre-de-Curtille near Aix-les-Bains in Savoy, France. For centuries it was the burial place of the members of the House of Savoy. It is visited by 150,000 tourists yearly.

The origins of Hautecombe lie in a religious community which was founded about 1101 in a narrow valley (or combe) near Lake Bourget by hermits from Aulps Abbey, near Lake Geneva. In about 1125 it was transferred to a site on the north-western shore of the lake under Mont du Chat, which had been granted to it by Amadeus III, Count of Savoy, who is named as the founder; and shortly afterwards it accepted the Cistercian Rule from Clairvaux.

It has sometimes been claimed, but as often disputed, that Pope Celestine IV and Pope Nicholas III were monks at Hautecombe.

Hautecombe was for centuries the burial-place of the Counts and Dukes of Savoy. Count Humbert III, known as “Blessed”, and his wife Anne were interred there in the latter part of the 12th century; and about a century later Boniface of Savoy, Archbishop of Canterbury (1245–1270), son of Count Thomas I of Savoy, was buried in the sanctuary of the abbey church. Aymon, Count of Savoy financed the expansion of a burial chapel at Hautecombe which was constructed from 1331 to 1342.

The abbot Anthony of Savoy, a son of Charles Emmanuel I, was also buried there in 1673.

The abbey was restored (in a debased style) by one of the dukes about 1750, but it was secularized and sold in 1792, when the French entered Savoy, and was turned into a china-factory. King Charles Felix of Sardinia purchased the ruins in 1824, had the church re-constructed by the Piedmontese architect Ernest Melano in an exuberant Gothic-Romantic style, and restored it to the Cistercian Order.

The Cistercians resettled the abbey from Turin, but the Italian monks soon left, and were replaced by others from Sénanque Abbey, who remained until about 1884. The premises were taken over by the Benedictines of Marseilles Priory in 1922, but in 1992 the monks left for Ganagobie Abbey in the Alpes de Haute Provence, and the buildings are now administered by the Chemin Neuf Community, an ecumenical and charismatic Roman Catholic group.

As you will be in the area, you could also visit the lovely village Chanaz (which has one of most beautiful canal in France). There is also a nice beach near by.

From there you could also do a cruise on the canal and Bourget Lake or just have lunch in one of their nice restaurant. You could also drive back up col de la Chambotte for a wonderful view of the lake or lunch at the Belvedère. 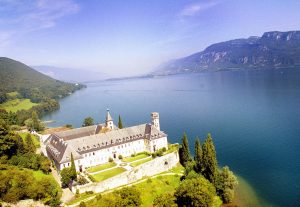