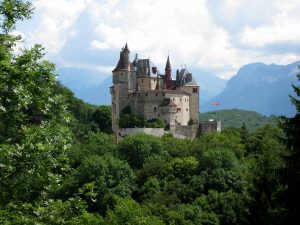 Menthon St Bernard’s Castle has been watching over one of the most beautiful alpine landscape for some 1000 years.

It is rising like a fortress, defying the surrounding mountains.

This noble castle has for many centuries remained inhabited by the counts of Menthon, an affluent Genevois family. In fact, according to the legend, St. Bernard of Menthon was born there in 1008 and the castle is home to many portraits of this saint and thaumaturgist who was venerated by the mountain villagers and gave his name to the famous rescue dogs.

Today the Menthon family – the 22nd generation known to have lived there – are opening the doors of their castle to the public to allow them to discover 105 rooms.

It is also said that Disney used the castle’s architecture to make their Princesses’ Castle in most cartoons.

At the origin of the castle in the 12th century, there were only 3 tall square towers connected by walkways and housing – a large courtyard where villagers found refuge during troubled times.

During the Renaissance, the austere castle was transformed into a place to live. Then, at the end of the eighteenth century a facade comes out of the ground, opening a view overlooking the lake.

Then, at the end of the 19th century, under the impulse of the great-grandfather of the current owners, René de Menthon, the castle began its great metamorphosis towards this romantic subtlety that gives it its charm and even its mystery…

To have a great picture, the best spot is when you are driving from Veyrier, take the road up to Bluffy/La Clusaz, after a few turns, there is a panoramic spot on the right where you can stop and take a photo of Menthon St Bernard’s Castle.

Not far away on the left, you can also find the “Charbonnières farm” for local dining with view on the stable, most dishes are with local cheese.