The “patois savoyard” belongs to the family of the “franco-provençal”, it is the local dialect of Savoie. It was then not written and changing from village to village and valley to valley. The Patois Savoyard is mostly used by the old generation in the country side, but some words are still used in every day’s life by locals.

* end your questions with “ou bien?”

* do not pronounce the x or z at the end of the words (La Clusaz, Chamonix, Col de la forclaz…)

* un Monchu = a tourist doing something stupid, in patois it means Sir, it is usually used to laugh at Parisian people coming to our mountains…

* une sniule ou un cacaniolet ou une grolle ou un tâtillon= someone unusually slow, annoying or lazy (I often use it in my taxi when upset)

* praz = meadow (you can find it in some village’s name)

* cacati = old wc in the back of the garden 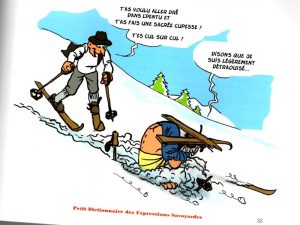