Reblochon is a French cheese from the Alps produced in the region of Savoy (departments of Savoie and Haute-Savoie) and has been granted the AOC title in 1958.

Reblochon was first produced in the Thônes and Arly valleys, in the Aravis massif near Annecy, on the way to La Clusaz. Thônes remains the centre of Reblochon production; the cheeses are still made in the local cooperatives. Until 1964 Reblochon was also produced in some Italian areas of the Alps.

Reblochon derives from the word ‘reblocher’ which when literally translated means ‘to pinch a cow’s udder again’. This refers to the practice of holding back some of the milk from the first milking. During the 13th century, the landowners would tax the mountain farmers according to the amount of milk their herds produced. The farmers would therefore not fully milk the cows until after the landowner had measured the yield. The milk that remains is richer, and was traditionally used by the dairymaids to make their own cheese.

In the 16th century the cheese also became known as “fromage de dévotion” (devotional cheese) because it was offered to the Carthusian monks of the Thônes Valley by the farmers, in return for having their homesteads blessed.

Raw-milk Reblochon has not been available in the United States since 2004 due to the enforcement of laws concerning the pasteurization of soft and semi-soft cheese.

The cow breeds best for producing the milk needed for this cheese are the Abondance, Tarine and the Montbéliarde. This cheese measures 14 cm (5.5 in) across and 3–4 cm (1.2–1.6 in) thick, has a soft centre with a washed rind and weighs an average of 450 grams (16 oz). As proof of its being well-aged in an airy cellar, the rind of this cheese is covered with a fine white mould. The optimal period to savour this cheese is between May and September (as the cows are outside during summer) after it has been aged six to eight weeks. It is also excellent from March to December.

Reblochon has a nutty taste that remains in mouth after its soft and uniform centre has been enjoyed. It is an essential ingredient of Tartiflette or Croziflette, a Savoyard gratin made from potatoes, bacon (lardons), and onions.

The smell of reblochon is quite strong and can be disturbing for some people, but believe me it is better when you eat it!

If you wish to bring one home, ask the cheese shop to put it in a vaccum bag in order to avoid the smelling.

Also in a cheese shop, you might have the choice between “reblochon fermier ” and “reblochon fruitier”, the fermier offers a better quality as hand made at the farm.

Before tasting it, take it out of the fridge 2 hours, enjoy a Apremont or Roussette wine with it! And of course some nice bread (old fashioned style with nuts inside!) 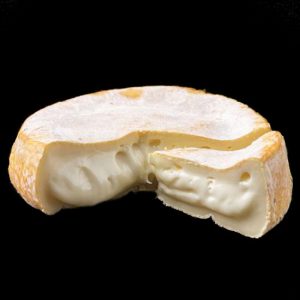