The Savoie’s Flag (above) is a white cross with a red background, the cross is reaching the sides of the flag.

Do not get confused with the square Swiss flag with a small white cross in the red.

In 1315, Amédée V from Savoie, Count of Savoie from 1285 to 1323, helped the St Jean Chevaliers in Rhodes and together they won again the Muslims. It is even possible that after the death of the Great master of St Jean Chevaliers, Amédée took his weapons and decided to become the leader of his army. And also used their flag (the flag of St Jean de Jérusalem, Rhodes and Malta are similars).

You have two Savoies counties, Savoie 73 with Chambéry as a main city and Haute-Savoie 74 with Annecy.

Savoie existed as an autonomous country for nearly a thousand years, and continues to shine as a distinct cultural beacon in the France of today.
Inhabited since the melting of the great continental glaciers, the area was occupied by Stone Age peoples some ten thousand years ago, as attested by archeological evidence, as in the Balme de Thuy rock shelter.

Known as Sabaudia in Roman times, the area was again invaded by warring peoples from the East, most notably the Alaman tribes in the 3rd century C.E.. Traces of their incendiary raids can still be found in archeological sites such as those at Le Thovey in Faverges. Christianity became the dominant religion in the area by the 4th Century, and has left elegant early monuments such as the St. Martin basilica in the town of Aime.

It is in the Middle Ages that the Earls of Savoie and the House of Savoie first gained great reknown and power; at times, the territory of Savoie included parts of what is now France, Switzerland (including Geneva), and northern Italy. The first and most famous of the Dukes, Amédée VIII (seen at left on a wax seal from 1410) was named Pope and took the name Felix V; he renounced the papacy in 1449, by this act bringing an end to the schism of the western Church. Over the centuries, the Royal house of Savoy ruled over a country whose borders changed with the fortunes of the family. At various times, the dynasty ruled Savoie, the Piedmont, Sicily, Sardinia, and eventually all of Italy.
Savoie itself became part of France in 1860, when the people of Savoie were asked by referendum whether they wished their country to join France or Italy. Since the area was French-speaking, the Savoyards voted overwhelmingly to join France, leaving the King of Savoie without a country to rule. However, the King was invited at this time to become King of Italy, which had just unified into a single country. A king was seen as a unifying influence by the politicians of the day. And so, the Savoie dynasty ruled over Italy until the last days of World War II, when the last king abdicated from the throne of Italy.
The name “Savoy” is frequently found in England and the United States, and is a reminder of the presence of Anne of Savoie in England, where she was the queen of Henry III. Her uncle, Peter of Savoie, built a palace and the Savoy Chapel that were later destroyed in Wat Tyler’s rebellion (1381); the name was resurrected in London’s Savoy Theatre, built by Richard d’Oyly Carte for the production of Gilbert & Sullivan operas. In the United States, the name Savoy has often been associated with theaters and dance halls, and has been immortalized in the jazz classic “Stompin’ at the Savoy.”

Locals are very proud to show off their Savoie’s flag! 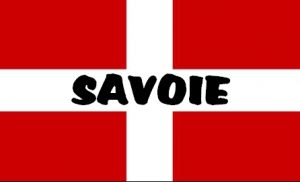