I went to Miolans Fortress for the Hallowen party and it was much fun to walk in the Castle with the Halloween Theme, games and the colors of the Fall. It is about one hour drive from Annecy (in the wine yards next to Albertville). Perfect way to celebrate Halloween with kids in the Savoie area, they also have other activities like Easter eggs Hunt. The garden must be beautiful in the Spring.

The Fortress of Miolans is a former fortress prison located in a remote area of Savoy between Italy and France. The site, which has been occupied since the fourth century AD, strategically controlled the route across the junction of the Isere river and Arc rivers. The fortress was converted into a prison by the Counts of Savoy in the mid-16th century. Its notoriety led it to be compared to the Bastille in Paris.

The fortress of Miolans is in the hamlet of Miolans, part of the small town of St-Pierre Albigny. It is located between the major towns of Montmélian and Albertville.

Located in the foothills of the Arclusaz mountains, the fortress lies on a 550m-long rocky ridge 200m above the Combe de Savoie valley. It overlooks the confluence of the Arc and Isère rivers where the bridge, known as the Pont-Royal, is sited. Beyond the fortress is the Maurienne valley.

In 1014, documents mention that the Miolans family – one of the oldest in Savoy – were in possession of the site.

By 1083, the Miolans had built a small tower castle on the rocky promontory. In the second half of the 14th century, the lords of Miolans extended the fortifications by completing a second tower. This had been supplemented with a third tower in the early 16th century .

In 1869, Eugene Alexander Guiter, Prefect of Savoy, privately bought the fortress from the French state and began its restoration. Castle Miolans was classified as a historical monument in May 1944.

Today the castle remains a private property but is open to visitors. 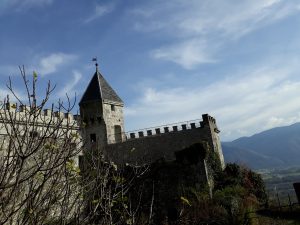 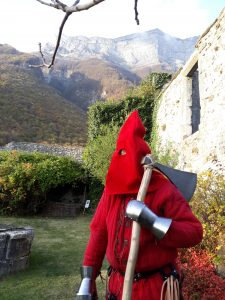